An end of year perspective on financial markets

An end of year perspective on financial markets

After showing great promise throughout the year, 2018 has ended disappointingly for investors. As at mid-December,  Australian and global share markets have produced returns of negative 2% to 3% (including dividends) for the calendar year. Cash and fixed interest returns have been moderately positive, ranging from less than 1% for global fixed interest to just over 3% for local investments. Listed property has also been positive, producing a gain of around 3% so far this year. The fall in the Australian dollar over the course of 2018 has provided one bright spot for investors holding unhedged global equity investments, with the lower $A pushing the value of equity investments held in overseas currencies higher by nearly 5%. 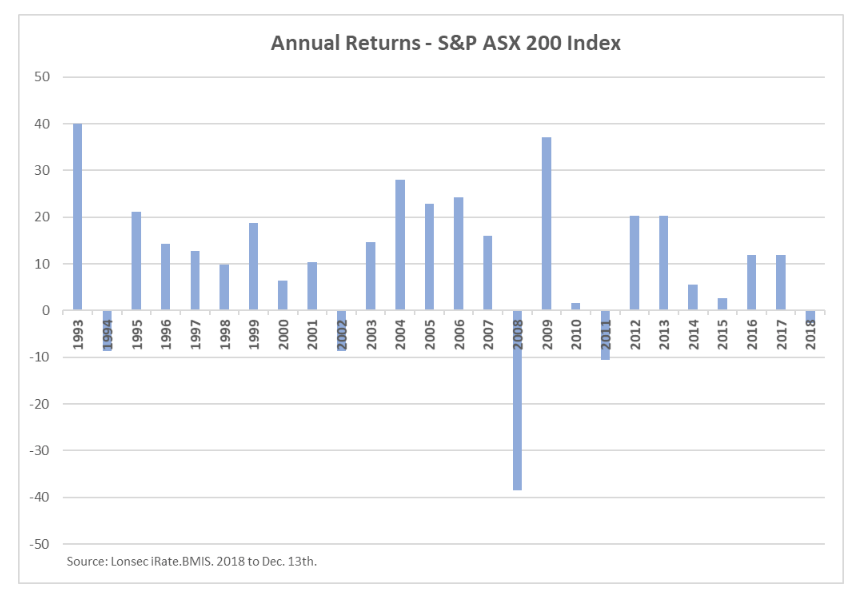 This year’s likely negative return from equities is the first calendar year decline since 2011. Over the past 25 years, the Australian S&P ASX 200 Index has produced 20 positive calendar year returns and 5 negative years. As such, the small negative return in 2018 should not be considered highly unusual. From a medium perspective though, the Australian equity market’s average annual return over the past 5 years of 6% is below the longer term 25-year average of 9%. It is also below the 10% per annum recorded by global equity markets over the past 5 years. The underperformance of the Australian market in recent years is consistent with the lower per person economic growth recorded domestically when compared with global averages.

It also highlights the benefit in investors being geographically diversified. None-the-less, the 6% annual return (plus franking credits) generated by Australian equities over the past 5 years has still provided a reasonable premium over the risk free cash interest rate average of 2%.

The year of 2018 was characterised by periods of very strong upward momentum in share markets spurred on by ongoing positive global economic growth. Over the course of the year, this growth became more and more United States centric, with the large U.S. Information Technology companies dominating growth momentum. The upward trajectory of markets was interrupted twice during the year. Firstly, over February and March share markets were sold off due to concerns that rising U.S. inflation and wage pressure would drive interest rates higher than expected. Notwithstanding some actual increase in U.S. interest rates, this fear gradually gave way to ongoing optimism around the outlook for company earnings which sent the U.S. stock market to a series of record highs. The positive sentiment that drove markets to these heights ended abruptly in October when share markets were sold off heavily, accompanied by a sharp increase in volatility over the December quarter. October’s correction appeared to reflect a combination of concerns around the level of market valuations, some very selective signs of a deceleration in U.S. economic momentum as well the uncertainty produced by the U.S. mid-term elections, the U.S./Chinese trade negotiations and the stalemate over the Brexit arrangements.

Outlook for the year ahead

Global share markets have tended to perform well over recent years due to the combination of steady predictable economic growth with maintained low inflation and low interest rates. Should this type of environment continue, then there is a reasonable probability of a return to positive returns from share markets. However, as was the case at the start of 2018, the threat that strong economic growth and tight labour markets, particularly in the U.S., will push inflation and interest rates above current expectations presents the greatest risk to equity markets. All else being equal, higher interest rates reduce the relative attractiveness of prospective equity market returns; and, as a result, share prices may have a tendency to fall in order equalise future risk adjusted return outcomes. However, the events of the past few months may have softened underlying inflationary risks somewhat, with the sharp drop in oil prices providing at least one deflationary force to offset  inflationary pressures. This appears to be the conclusion of global bond markets, where the upward trajectory in yields has been partially reversed over recent weeks.

In addition to the risk that the “goldilocks” combination of solid economic growth with low inflation is disrupted, the geopolitical environment presents somewhat heightened risks. The U.S./China trade situation remains the most significant of the potential threats. Of additional concern is that across the U.S., Europe and the U.K., the position of incumbent governments  appears increasingly tenuous, which may not be conducive to sound economic management in the immediate future. However, in the case of the U.S./China trade dispute, both parties have a strong incentive to negotiate a workable outcome, which, if forthcoming, could actually prove to be a source of support for share markets over 2019.

Australia is not immune to the political risks presented globally and a likely change of government here provides an additional source of uncertainty. Much of the domestic focus of markets will be on residential housing and ascertaining the impact of falling prices on banks and the broader economy. Continued underperformance of the Australian share market is possible until the bottom of the housing price cycle is known, and the impact can be assessed.

Investment strategies that appear relatively well positioned for the period ahead are described below:

Maintaining a focus on the long term

At this time of year, there is typically a strong focus on annual performance and the outlook for the year ahead. Whilst reflection and the assessment of future risk and opportunities are healthy investment activities, a one year time horizon is generally too short for any meaningful assessment or prediction. For longer term share market investors, the appropriate question to be asking at any time of year should be “is there a reasonable prospect that the companies listed across global share markets will improve their earnings over the longer term?”  History suggests that the answer to this question is invariability “yes” and that ultimately share prices and dividends will follow earnings.

This document is intended for the use of financial adviser clients of Navwealth and their staff only. Any advice provided is of a general nature and does not take into account personal circumstances. Any decision to invest in products mentioned in this document should only be made after reviewing the relevant Product Disclosure Statements. Past performance is not a reliable indicator of future performance. No revenue has been received by Navwealth as a result of the production of this document.​​

This document has been prepared by Plain English Economics Pty Ltd, trading as “Brad Matthews Investment Strategies” (BMIS). Plain English Economics Pty Ltd is a Corporate Authorised Representative of First Point Wealth Management P/L AFSL 483004). The document is intended for the use of financial adviser clients of BMIS and their staff only. Any advice provided is of a general nature and does not take into account personal circumstances. Any decision to invest in products mentioned in this document should only be made after reviewing the relevant Product Disclosure Statements. Past performance is not a reliable indicator of future performance. No revenue has been received by BMIS as a result of the production of this document.